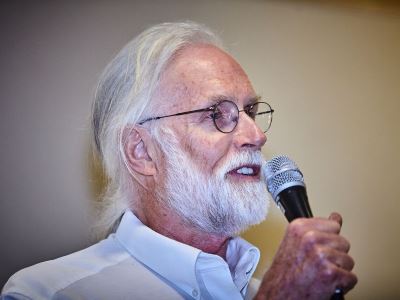 Mike has been the heart and soul of our bus trip program for over 30 years now. He is always searching for new wilderness areas to visit and new trailheads to backpack. Mike has led hundreds of trips and shared with his groups the magnificent secrets of the backcountry. Mike is also our encyclopedia of every historical environmental event and feature along Hwy395. 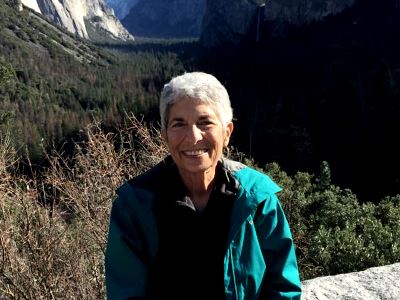 Without whom we would not have permits for our bus trip outings! Alice has been active in our Cross Country Ski Section for more than 30 years, and has been involved with the Wilderness Basics Course for the past 5 years and currently is the Snow Camp Coordinator. In addition to skiing, she enjoys hiking, backpacking and adventure travel. 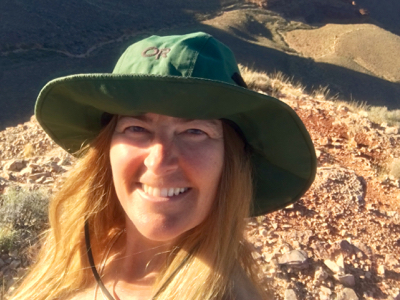 2005 was April’s first backpacking trip to the Sierras and couldn’t sleep all night. Maybe it was the excitement of the new experiences of being in the wild, or maybe it was the thoughts of the mountain lions and bears that she knew where out there somewhere watching... The connection to the natural beauty of the outdoors and the wonderful people she meets on the trail have kept her returning ever since. She has been part of Sierra Club San Diego Chapter since 2018 when she completed the WBC and decided to become a Sierra Club trip leader. April has backpacked in Grand Canyon, Bryce Canyon, Lost Coast Trail, Catalina Island, Hawaii, among other places. Her favorite hiking spot was Torres del Paine in Chile. April loves exploring new places and meeting new people. Say Hi! If you see her, April loves chatting and taking group photos. 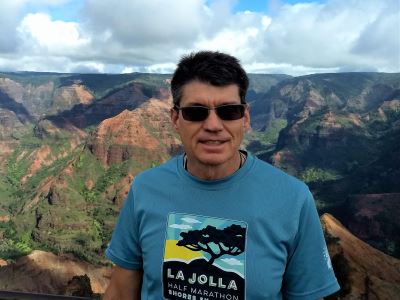 Byron has been hiking the Grand Canyon since Jimmy Carter was President and its many trails are always a place he wants to explore. Byron became a Sierra Club Chapter Outings Leader is 2000 and since then, he is always looking for the more adventurous and strenuous trips. He is a volunteer for the Joshua Tree Search and Rescue team and has hiked many of the trails and climbing routes in Joshua Tree in the dark and during the most difficult conditions. 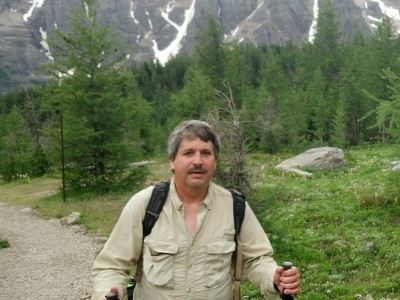 Dave Voss has led dozens of outings, from urban areas to the backcountry. He has worked to protect our natural spaces by serving on several committees with the Chapter, including the Forest and Wilderness Committee. He always includes a conservation component to his trips and is well regarded for his ability to spot and attract wildlife, especially ticks. 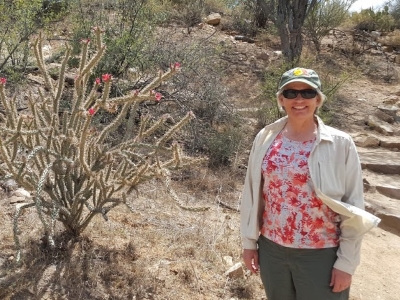 Diane is passionate about the great outdoors and various activities including hiking, biking, backpacking, swimming, and skiing. After many years as a competitive runner, she switched gears and took up hiking. She moved to San Diego from New England 15 years ago and rapidly joined the Sierra Club. She participated in many outings and then became an outings leader. She leads backpacking trips in the Sierras for the bus program and in the desert for WBC and loves sharing the beauty of nature and the joy of hiking with others. 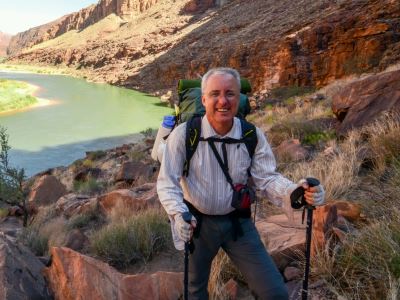 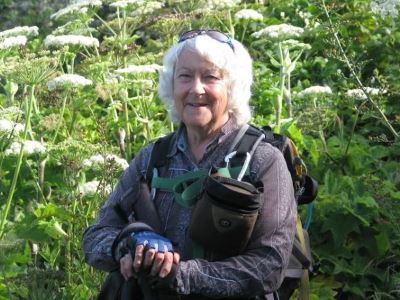 Ellen Feeney has been a leader with the Sierra Club for over 30 years. She has lead children's groups and adults on backpacking, kayaking, snorkeling, hiking, tidepooling, backcountry skiing and Pacific Crest Trail trips. She has camped and hiked in Joshua Tree area many times and enjoys desert flowers above all others. 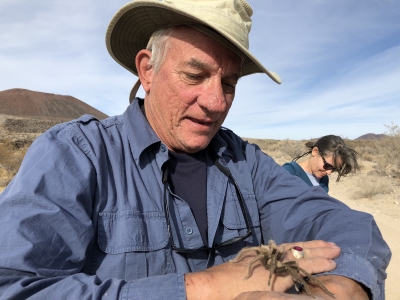 Picture here with his dog Spot. George is a COL II and a Sierra Club North County Group member since about 1996, a retired general contractor, kayaker, hiker, etc. George feels that as a species we have not been the best stewards of this planet. He feels that a walk in the woods helps rejuvenate and re-directs the soul. 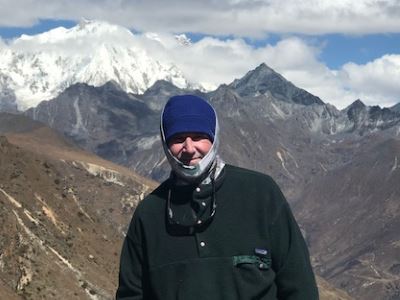 John went on his first Sierra Club outing in 1995 and it was life-altering. Since 1999, he has been leading trips for the Club and has served on the Sierra Club’s Medical Advisory Committee and is a leader for the Wilderness Basics Course. John’s is passionate about backpacking, mountaineering and sailing and traveling the world seeking adventure. With all his world-wide travels, he is never disappointed by the wilderness close to home. The backcountry and the ocean rejuvenate his spirit, but he also appreciates the urban comforts found at home with his partner and two terriers. 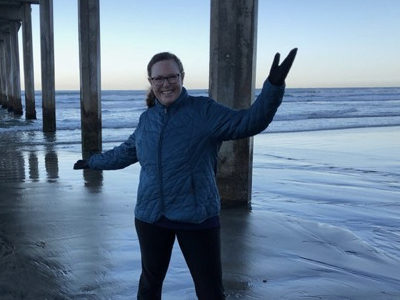 Karen grew up in San Diego as part of an active Sierra Club family. She completed the Basic Mountaineering Course in 1975, while she was still in High School (the rules were different back then). As a young adult, she was an Assistant Leader on many National Sierra Club Backpack trips for her Dad or her Dad's friends who needed a good commissary chief. Karen is now a retired teacher and back to backpacking. Karen's passion is hiking in and around San Diego, as well as any trail close a coast. 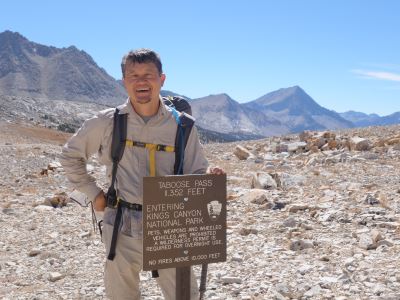 Chong has been answering the call of the great outdoors with backpack trips to the Sierras, Zion and the Channel Islands since completing WBC in 2010. He started leading trips as an outings leader in 2015. Chong Loves to plan and lead trips off the beaten path, through hidden valleys and up unnamed peaks. 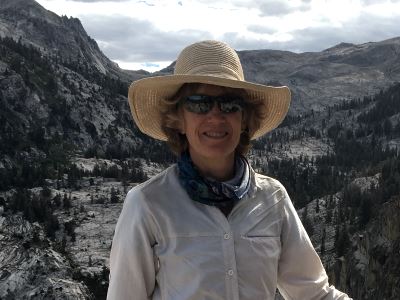 Kris has been hiking / backpacking for many years in the Sierras. Since moving to San Diego, a few years ago, she has become active with the Sierra Club, and become an outing leader. She enjoys getting away from the crowds, but also wants to encourage others to step out and extend themselves. Her favorite part of getting out is the time to sit still and enjoy the surprises (wildlife) that you encounter beyond the crowds. 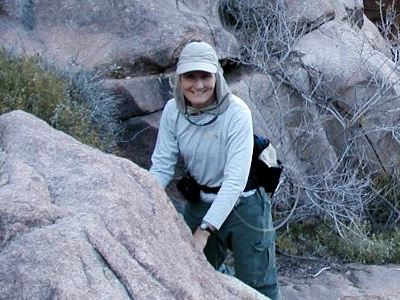 Lynn became a member of the Sierra Club in 1991, completed the Wilderness Basics Course in 1992, and has been leading outings for the Club since 1995. She enjoys peakbagging and extended backpacks in the Sierra Nevada high country in the summer, and has hiked over 1,000 miles of the Pacific Crest Trail in California. Her favorite hiking places are San Jacinto and San Gorgonio areas, just about anywhere in the eastern Sierra, and the Yosemite high country in particular. Lynn moved to Bend, OR in the summer of 2016 but remains committed to participating in her favorite outdoor pursuits in CA, with her many special San Diego Sierra Club outing leader friends and fellow adventurers. 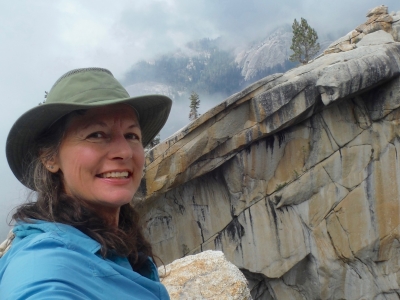 From her upbringing in Europe, Medy grew up camping in the Danube delta, and on the beaches of the Black Sea. Her love of backpacking is fostered by the Sierras and the breathtaking views in the wilderness. Her favorite pastime is hiking small parts of the John Muir Trail and Pacific Crest Trail with friends and outdoor enthusiasts. She enjoys inspiring people to get outdoors and explore the serenity and beauty of nature. 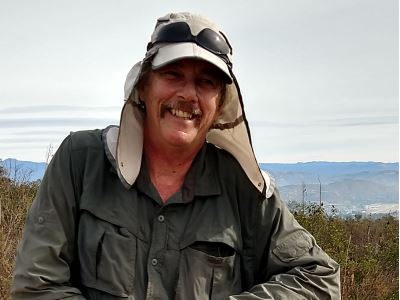 Michael has been a leader since 2011 and an active Sierra Club member long before that. He currently serves as the Chair for the Wilderness Basics Course and the Leadership Review and Safety Committee. Michael is also involved with the Social Section of the Sierra Club San Diego. 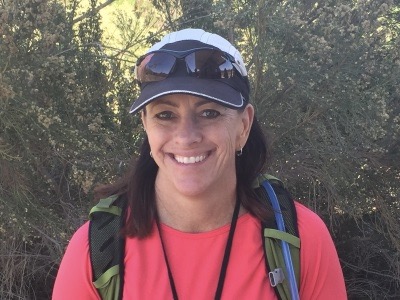 Michelle became involved with the San Diego Sierra Club through the Wilderness Basics Course in 2011. She spent much of her California childhood rock-hopping in creeks and many of her college years hiking, backpacking, and working with kids in the outdoors, so she felt right at home at WBC. She has volunteered her time in many ways with our club ever since and has been a Chapter Outings Leader since 2014. She is an elementary teacher, and also enjoys wildlife tracking and harvesting wild edible salads. 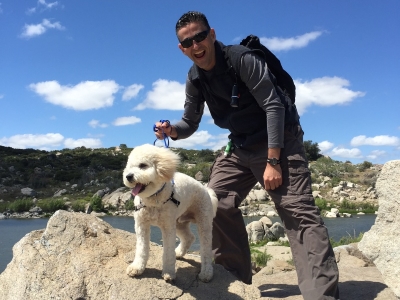 Oscar took the Wilderness Basics Course in 2016 which introduced him to the Sierra Club. After participating in outings, he became a COL and enjoys being part of the bus trips. He is passionate about being outdoors, volunteering and loves to hike the San Diego area with his two dogs. 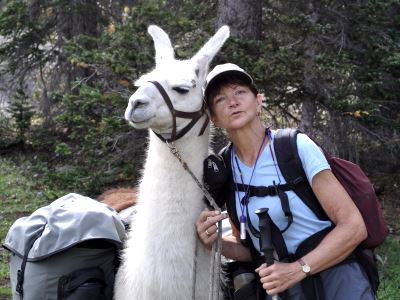 PJ discovered the wilderness while working for Fish and Wildlife in Minnesota. She took the Basic Mountaineering Course during the Pleistocene and led outings for it as well as bus trips. She enjoys map and compass work. (I know! Really?) She serves on the bus committee. Her favorite places to hike are isolated and have lots of green, trees, shade, and cascading water. Oh, and no bugs. 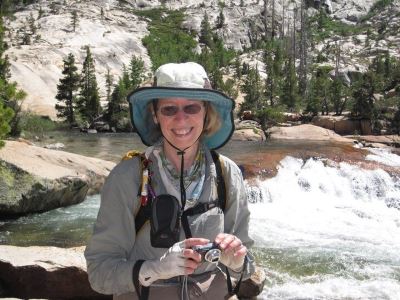 In 1976, Pauline discovered backpacking through our chapter’s Basic Mountaineering Course (later called the Wilderness Basics Course). She became an experienced Chapter Outings Leader, and has been “giving back” as a WBC instructor for over 25 years. Pauline is also a certified interpretive trail guide for the San Diego Natural History Museum’s Canyoneers program. Her trail avocations include native plants, “naked eye” astronomy, singing with her guitar, and harmonica concerts under the stars. 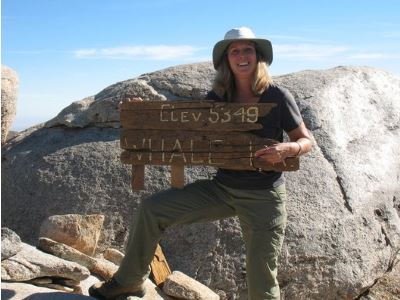 Rachel has been sharing her love of the outdoors with Sierra Club members and Wilderness Basics students since 1998. Her favorite hikes are Whale Peak in the Anza Borrego desert and San Jacinto Peak from Idyllwild. The bus trips are a great opportunity to see new places and hike with other outdoor enthusiasts. 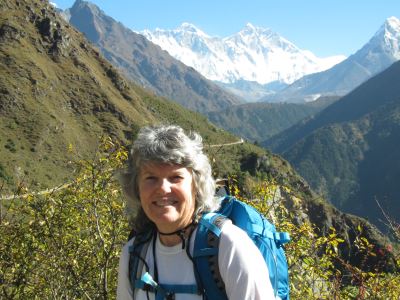 Sharon has been hiking and skiing with the Sierra Club for 25 years and has been a leader for the past 20 She leads day hike locally and on base camp bus trips as well as cross-country ski outings on marked trails. Sharon has assisted on numerous backpack trips in the Sierra Mountains and on various cross-country skip trips. She loves to hike in our Sierra Nevada Mountains as well as in international locations such as Greece, Italy, Peru (Inca Trail to Machu Picchu), the Himalayas in Nepal, and the Coast to Crest trail in Northern England. 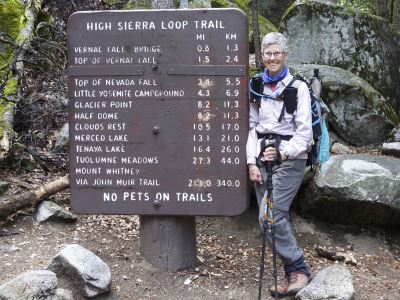 Sharon took the Wilderness Basics Course first in 2008 and has been involved with the program ever since. Her proudest backpacking accomplishment is completing the 210-mile John Muir Trail from Yosemite Valley to Whitney Summit. She loves the bus trips because they open new vistas with diverse companions. 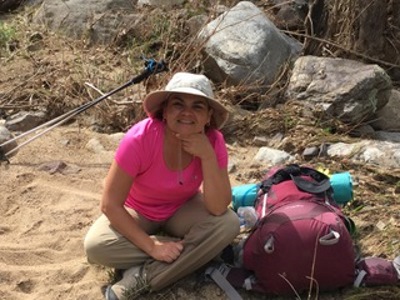 Sonja started her journey with the WBC class in 2016 and hasn’t looked back. She became a COL 1 in 2018 with her husband and looks forward to becoming a COL II. She enjoy the outdoors and exploring new trails and meeting new people. An important goals for Sonja include travelling to new places and having new experiences. She loves learning new things and she is able to do this all the time with the Sierra Club. 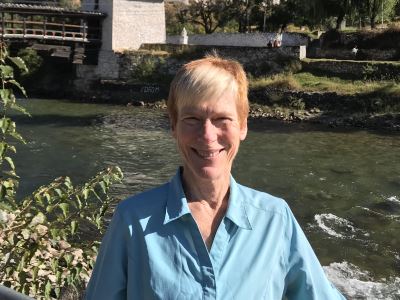 Starla has enjoyed leading outings for the Sierra Club since 1995. Her favorite outings include leading snow camp for the Wilderness Basics Course and anything in Yosemite National Park. Other interests include international travel where she has summited Mt Kilimanjaro and trekked to Mt Everest Base Camp. 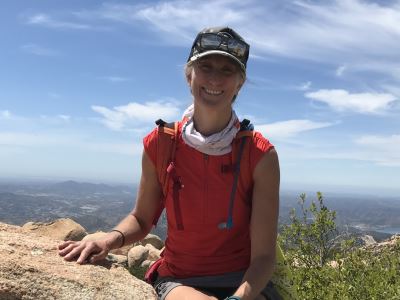 Stefanie has been leading outings with the Sierra Club since 2007. She graduated from the C.O.R.E. (Canadian Outdoor Recreation Educator) program in 2005 before moving to San Diego where she found her passion for hiking and backpacking. She was Chair of the Wilderness Basics Course in 2016 and 2017 and is currently the Sierra Club San Diego Chapter Leader Training Coordinator. Her favorite place to hike or backpack usually involves waterfalls. 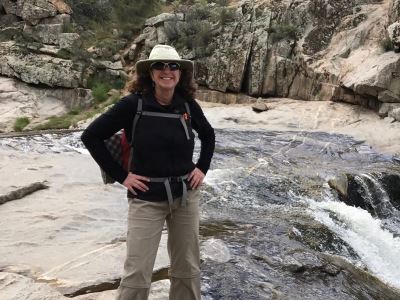 Veronica has been backpacking for the past 25 years. She is a COL II Sierra Club Leader. She is on staff at the Wilderness Basics Course in San Diego since. Veronica leads backpack trips for Sierra Club Bus Trip Program, is a member of the City of Vista Emergency Operations Committee and a Certified Red Cross First Aid instructor for Wilderness First Aid, Standard First Aid, CPR and AED. 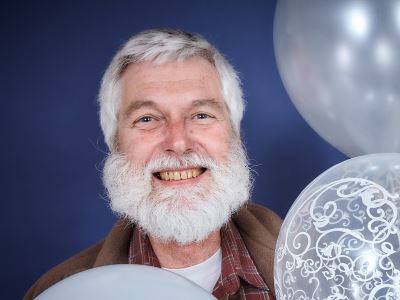 Nature has always been a passion for Walter. The first book he asked for as a Christmas present as a child was a cheap edition of Audubon's Birds. He has been active in the Sierra Club since 1972 leading hikes, backpacks, bike rides, and serving on committees. Since he retired, he has also been leading nature walks for the Natural History Museum, hiking, traveling, and taking classes.

Explore, enjoy and protect the planet